Partly because I had so many beers to sort through. April was a particularly hectic month and involved a lot of amazing beer. My birthday weekend, Magic Rock’s Un-Human Cannonball launch event and trips to London and Aberdeen for BrewDog’s AGM.

But also because I’ve been busy so drinking even more beer in May. First at Cantillon in Belgium and then CBC in Copenhagen, but more on those over the next few weeks.

For now, here are the best from April…

I came back from a trip to London with a box set of six Mikkeller barley wines (as you do).

The same barley wine is barrel aged in six different barrels. Three different types of French oak are used with each either light or medium roasted. 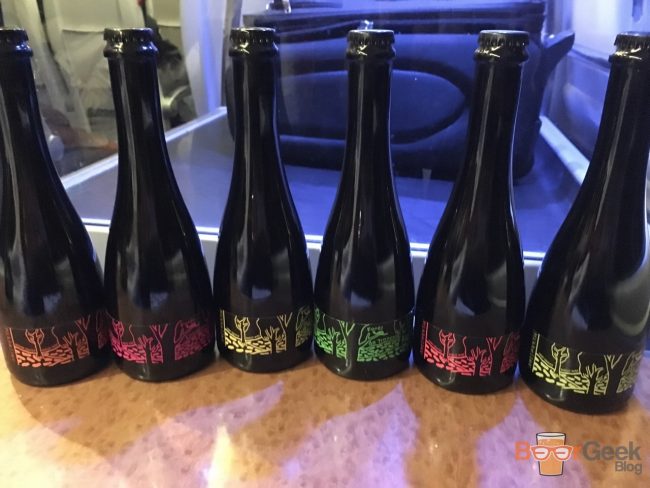 I fully intended on bringing all six home but ended up picking one at random and drinking it on the train.

I’d love to give you extensive tasting notes but after a long day in London, I perhaps wasn’t quite at my best.

I do recall being amazed by the lightness and subtlety for a 19.3% beer. Flavour wise it was sweet and slightly fruity with notes of caramel and toffee coming through. 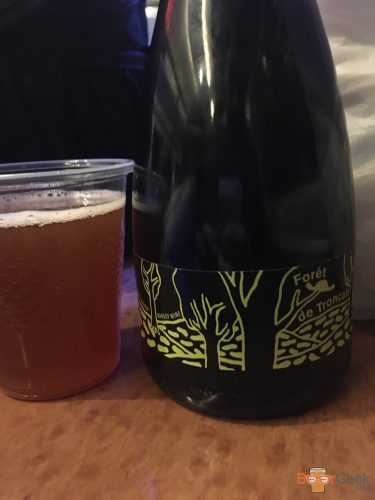 Each was aged in various barrels including tequila, Pedro Ximenez, red wine, Madeira and Jack Daniels, before being blended together.

I can’t claim to be able to pick out all of those flavours but there lots of little hints. Port-like sweetness, oaky woodiness, bourbon and a touch of vanilla.

I’ve been a long time fanboy of Chorlton Brewing since they started in late 2014.

And although I’ve loved most of their beers, the first, Calibration Sour (later rebranded Amarillo Sour) has always been my favourite.

The new Mosaic Sour gives it a run for its money, though. Similar to Amarillo Sour but with the obvious switch to mosaic hops. 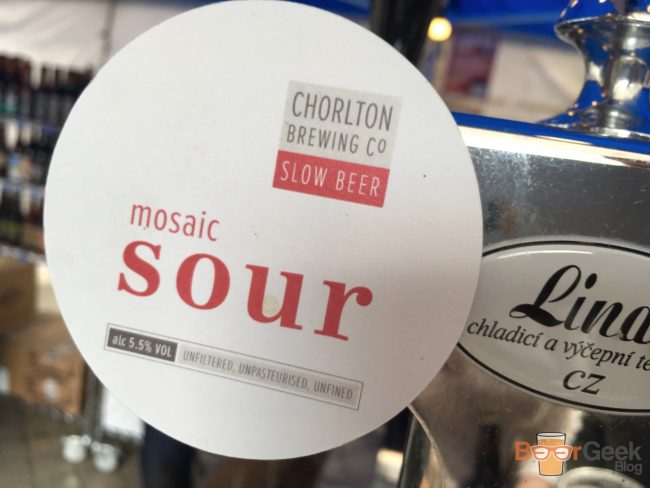 It’s quite dry and as light and refreshing as a sour beer gets. The tartness is well balanced and packed with flavour. Full on citrus with hints of pineapple and other tropical fruits.

I hope this becomes as readily available in cans as Amarillo Sour is.

Although all the beers at the Hop Locker on London’s Southbank are great (disclosure: the owner Joel is my friend but it is genuinely a great bar) Joel likes to share rare and special bottles when friends are around.

On my last visit he was kind enough to share a bottle of Lost Dog. A collaboration between BrewDog and Californian barrel-ageing experts The Lost Abbey brewery.

An 11.5% imperial porter that was aged in rum barrels. Bottled in 2011 so already a good 5 years of ageing.

It’s very sweet, with dark fruit and raisin flavours. The rum was prominent and worked well with the other flavours.

Despite being brewed with seven different malts it tasted more like a barley wine than a porter, but that’s never a bad thing.

I’ve had quite a few Almanac beers and always found them decent but nothing spectacular. These included their IPA, saison and a couple of regular sours.

Then I stumbled upon this ‘Farmers Reserve’ range of sour beers and so far all have been fantastic. This one is a bretted, wine barrel aged sour blonde dry hopped with German Mandarina Bavaria hops.

Flavour is complex; sour and funky with big bursts of fruit and citrus. One of the best modern sour beers I’ve had for a long time. 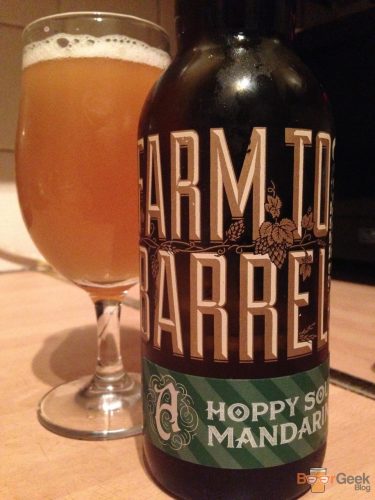 Also a big shout out to another in the same range, ‘Citra Sour’ which I had at Cafe Beermoth around the same time. It’s similarly great with the distinctive flavours of the more common Citra hop. 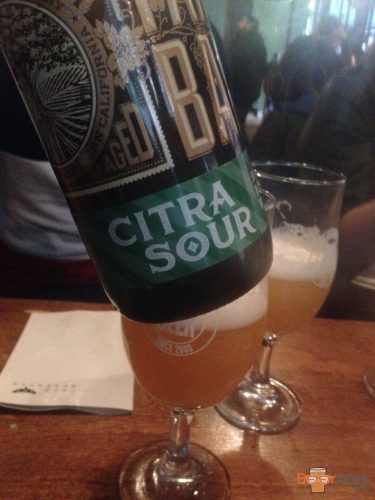 I’d been after trying this beer for ages and ended up having it twice in April.

First on keg at the brilliant CASC in Aberdeen and then a bottle at the equally good Cafe Beermoth in Manchester.

So soft and rounded with massive cherry and raspberry flavours. Totally deserving of its 100/100 Ratebeer score. 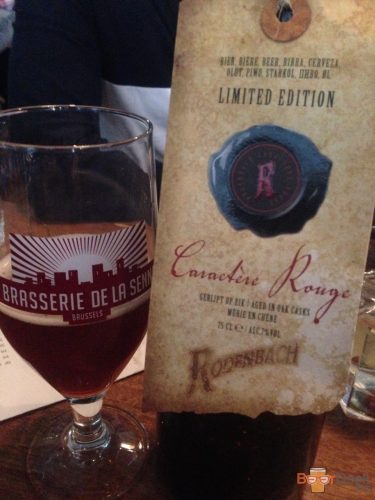 I’ve been to The Smithfield a few times and always been pretty happy with the draft boards. On my last visit, I was struggling for something I really wanted to drink, so decided to get stuck into the rather impressive bottle selection instead.

I had a small taste of this famous Gueuze at last year’s Indy Man Beer Fest so I was very happy to find it in the fridge. It was every bit as good as I remembered.

A lovely golden colour with distinctive brett aromas. Flavour is tart and fruity with lots of berries, plum and some lemon too. 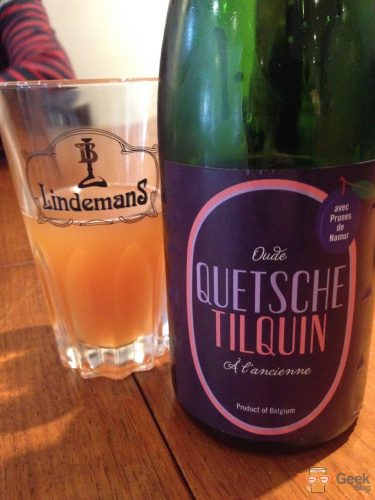 I had this collaboration with the not-craft-anymore Ballast Point twice in April. If I’d not had it the second time it wouldn’t have got anywhere near this list.

It’s a strong ale aged in Speyside and Islay casks, brewed with smoked malt and smoked agave syrup to encapsulate the flavours of mezcal. They definitely pulled off the smokiness but there was just too much going on for me the first time around, I just didn’t get it.

But I enjoyed it so much more the second time and could understand exactly what it was trying to be. Smoky, fruity & peaty in equal measure.

Key Lime Tau was brewed by one of my favourite American breweries Crooked Stave in collaboration with Hawkshead Brewery as part of the Rainbow Project last year.

A mixed culture sour brewed with fresh lime peel and lemongrass with lactose.

I really liked the original version brewed at Hawkshead but this version which was brewed at Crooked Stave in Denver is even better.

It’s tarter and has more pronounced lime and lemongrass flavours.

There have been a lot of imperial IPAs released lately, mostly DIPAs. But my favourite is technically a TIPA, Un-Human Cannonball.

The third and biggest member of the Cannonball family is released just once a year. I enjoyed last year’s launch at North Bar in Leeds but it was great to head to Magic Rock Tap for this year’s event.

It smells amazing, like fresh hops with mango, passion fruit and pineapple. It tastes like all the hops in the world have been used. It’s thick and chewy with tropical fruits and a refreshing bitter finish.

I try not to repeat beers on this list but some are just too good to ignore, no matter how many times I drink them.

I had Bearded Lady twice in April, on keg at Magic Rock Tap after doing the ‘Cannonball Run’ and then again from a can on a train. My last can, I really hope they release some more.

Finally, another beer that has made the list before but is far too good to ignore.

The stunning blueberry lambic from Mikkeller. A gorgeous purple colour with a fruity aroma and full on sour blueberry flavour. And a thick, rich mouthfeel.

I made the decision not to include any of the 21 beers I drank at BrewDog’s AGM in my regular ‘Best Beers’ list. They were all so good they’d have dominated the above list.

Instead here is my Top 10 from the AGM, you can read more about it here. 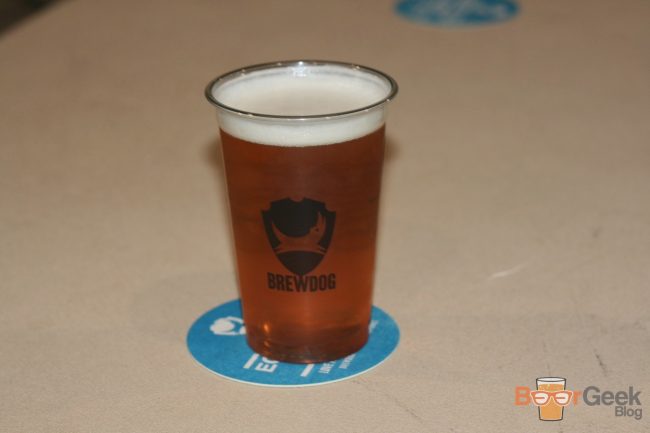