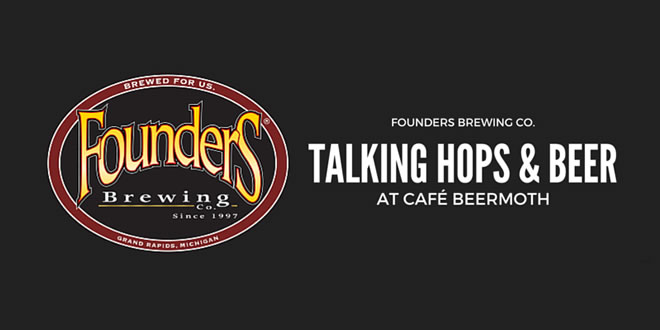 There are a few key beers I can pinpoint as important turning points in my craft education. Founders Brewing Co’s ‘All Day IPA’ and later ‘Centennial IPA’ are right up there amongst them.

Since then I’ve sampled many more of their range and enjoyed most of them, with some real highlights.

The American craft brewing legends were in Manchester recently to talk all things hoppy and launch two new beers at Cafe Beermoth, fast becoming my favourite place to drink. 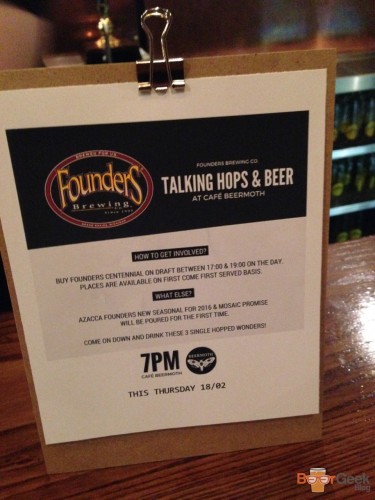 Getting a ticket to the talk was easy, just turn up and buy Founders Centennial on draft between 5pm – 7pm (the talk started at 7pm).

So I did exactly that and at 5:01pm precisely was sat in one of Cafe Beermoth’s spacious and comfy booths with a half of Centennial.

A beer that blew my mind when I first tasted it several years ago and one that I’ve enjoyed from bottle and later can many times since, but never before on draft.

Although Centennial is available from most bottleshops and even some supermarkets now (well, Booth’s mainly) we never seem to get them anything like fresh enough. So it was great to have this shipped over with the guys from Founders. The difference was immediately obvious.

That same sweet caramel malty background is there but with an almost unrecognisable fresh hop profile – that you just don’t get from a bottle/can – keeping things beautifully balanced. It was more floral and citrussy than ever before.

A textbook U.S IPA, no wonder it’s used as a benchmark for the Beer Judge Certification Program of America.

The talk was held in Cafe Beermoth’s small upstairs seating area. The guys from Founders – Tim and (I think) John – gave us a history of the company before discussing the two new beers.

I already knew much of the story; that they were founded in Grand Rapids, Michigan in 1997 by homebrewers Mike Stevens and Dave Engbers and of their rise, recent expansion and successes.

There was plenty I didn’t know too. I was fascinated to learn that their first ever beer was ‘Dirty Bastard’, an 8.5%+ scotch ale. I can’t imagine many fledgling breweries start off with such an extreme beer.

And that they apparently produced the first ever Bourbon barrel aged beer (although I have reason to believe that this is not actually true). Made using Heaven Hill casks which were given to them – these days breweries pay good money for them due to demand. They also do more barrel ageing than any other brewery.

Other bits that whilst probably were true sounded like they came straight from their marketing department; that quality control and sanitation are as important as inventiveness and a bit of a rant on keykeys (they only use steel kegs you see).

Overall though it was a great talk, they both spoke passionately about the company and answered all of our questions. There was even a joke about Canal Street at one point.

Then it was time to try the two new beers.

First up, ‘Mosaic Promise’, a seasonal beer which is actually two years old but hasn’t been available in the UK before. The beer was created as part of their sponsorship of ArtPrize, the world’s oldest arts competition.

A quite light but clean and crisp IPA. The mosaic hops are really distinctive and allowed to be the star of the show.

I hadn’t realised that all three beers were single hopped, mainly because I’d never heard of azacca before. They’re a fairly new variety of American hops and this beer is full of them.

Azacca is also a seasonal beer and another textbook U.S IPA. Bursting with fresh hops – it’s hopped every 10 minutes during the boil and then dry hopped at the end – they give a lovely tropical and citrus aroma, with huge juicy mango and pine flavours.

I enjoyed all three beers but this was the pick of the bunch for me.

The Best Beers I Drank In… SEPTEMBER 2015

It was a particular challenge not to let this list be dominated by two fantastic ...