I decided to take a short break from blogging last month so didn’t add to this ongoing series.

I haven’t gone in for any of that #dryanuary nonsense but I did decide to take it a bit easier in January after a fairly indulgent Christmas. So I was worried for a while that there wouldn’t be enough quality or quantity to fill this months post.

But I needn’t have worried; I actually ended up having to leave some really great beers out.

If you can get past the hype, childish claims (“World’s Strongest Beer In A Can” blah blah) and high price tag, Black Eyed King Imp is a stunning beer.

I loved it the first time in December when it was one of my #12BeersOfXmas but somehow it tasted even better a month on.

The coffee taste is still quite subtle. Perhaps due to the bourbon casks its aged in before Vietnamese coffee beans and vanilla pods are added.

It’s complex but incredibly well balanced for a 12.7% brew. I still think putting it in cans was a gimmick but I can’t say I’m not happy they did. It’s great to have such fantastic beers so easily transportable. This was taken to a hotel I stayed in recently as I had a feeling it might be better than their room service (I was right).

The first time I had this ‘white chocolate stout’ it totally blew my mind. It looks like a pale beer, smells like white chocolate and tastes like a sweet stout.

That was on keg at Harrgate Tap a couple of years ago. It’s always dangerous to go back to something you have such fond memories of but thankfully the Westwood Stout didn’t disappoint and was almost as good as I remembered.

It’s slightly hoppy and a bit floral but mostly it’s like drinking a Milky Bar. 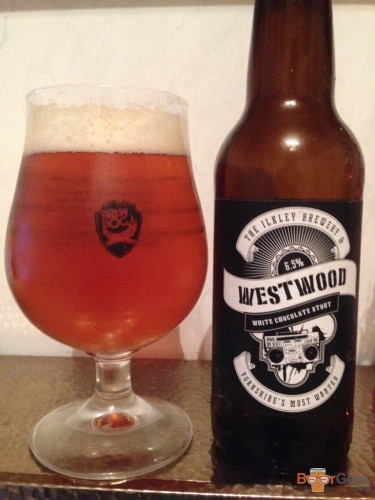 I’m not a huge fan of Sorachi Ace hops, I can count the sorachi beers I genuinely like on one hand. Two of them are made by Amager.

It’s the way that they blend them with other hops that makes it work for me. Whilst that distinctive almost coconutty flavour is still detectable, it’s melded into something entirely different when combined with Amarillo, Chinook, Simcoe, Citra, Mosaic and Centennial.

Batch 1000 is a proper juicy American IPA, bursting with hops. There’s sweet caramel in the background with grassy, piney, tropical fruit flavours on top. It’s quite bitter and like most Amager beers I’ve had the flavours are very clean, despite how much there is going on.

I’d expected this to be a massive hop bomb given the name. But actually, although it is packed with hops it’s really quite subtle and well balanced.

Taste is similar, with citrus and tropical flavours joined by pine and floral notes. There’s a slight sweetness upfront which is quickly beaten down by a dry, refreshing bitterness. 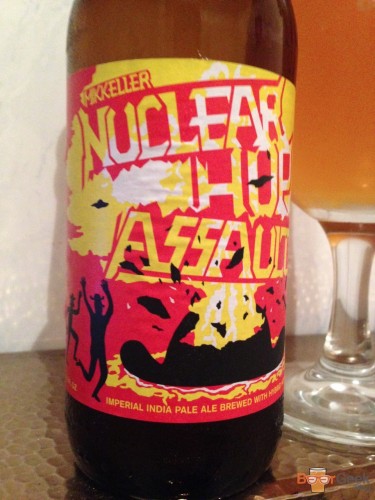 This beer had somehow eluded me for almost a year. I just missed it on several previous trips to Magic Rock Tap and somehow ended up attending the three Indy Man sessions (out of six) that Piña wasn’t on.

But the stars finally aligned in January; it was on at the Tap on a day I was going to be in Huddersfield. Result.

You’d think after such a build up it could only end in disappointment, but no. It was every bit as good as I hoped.

The sour pineapple saison is intriguing and complex but utterly delicious. It’s full-on pineapple flavour but without any of the sweetness that you’d expect. The combination or Brett and saison yeast then kicks in along with acidic white wine notes from barrel ageing.

I liked it so much I bought my first growler and filled it with Piña, the intention was to make it last a few days. It was gone the next afternoon.

I got a version of this in my Mikkeller advent calendar and  absolutely loved it. When I saw it on in The Grove in Huddersfield I couldn’t resist ordering it again.

I didn’t realise at the time but it was actually a different version. Same beer, different coffee.

The previous version was made with Santa Barbara while this one used Ethiopian Michiti.

I’m not enough of a coffee geek to say whether it made a big difference but I enjoyed them both. A great IPA with subtle coffee flavours.

Fantôme are one of the breweries I want to get to know more in 2016.

The Belgian brewers are famous for their saison’s, so what better place to start than ‘Magic Ghost’, their divisive green saison.

I know it looks like one of those horrendous St Patrick’s Day beers full of food colouring but this colour is apparently totally naturally and derives from the green tea with which it’s brewed. Apparently the colour can vary greatly from bright neon green to dark ‘swamp’ green. I think mine was somewhere in between.

I really wasn’t sure what to make of it at first, it’s certainly unique in both appearance and flavour.

The green tea flavour isn’t huge but is definitely there, it’s much more bitter than a regular saison, almost too much at first but it really grew on me and I loved it by the end.

I hadn’t had many Tempest beers before and wasn’t massively impressed with the couple I had. But I’ve been hearing great things about them lately so decided to take advantage of a free delivery offer on their website and ordered one of everything. 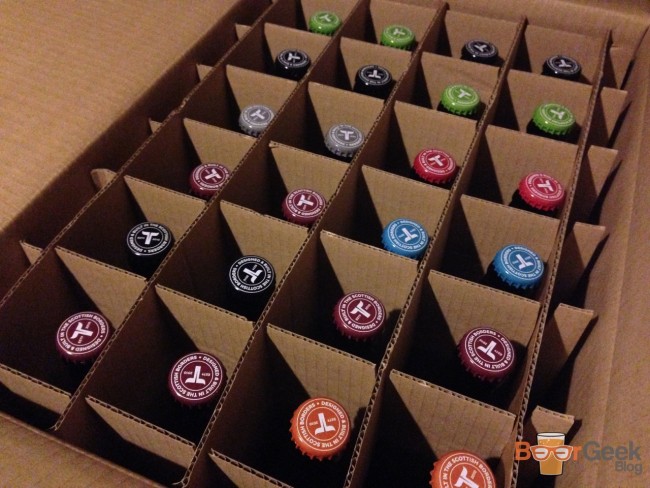 After they arrived I picked ‘Brave New World’ to start. Totally at random but it was a wise choice, as it turned out it was just nine days old! You’re not going to get beer any fresher than that, particularly online.

The freshness was immediately obvious too. A really nice American style IPA, almost perfect for my tastes in fact. Citrus aroma, dank piney flavours and a refreshing bitterness.

Despite being a massive Magic Rock fan I’ve been a little disappointed with their canned offerings so far. Cannonball, High Wire Grapefruit and Salty Kiss are all great beers but nothing like as good out of a can as on tap.

I was very happy to find that Bearded Lady Grand Marnier tasted almost as good out of the can as I remembered from the keg version last year.

The novelty of 10%+ imperial stouts in cans still hasn’t worn off for me. I enjoyed the first of my cans on the train home, #trainbeers really don’t get much better. 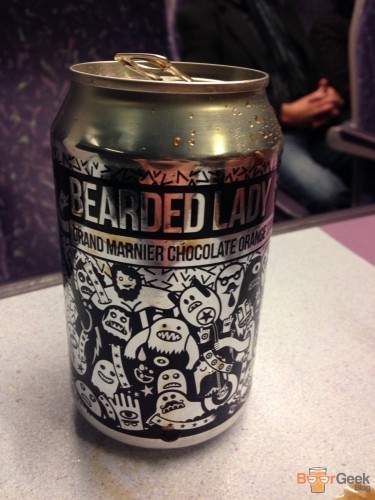 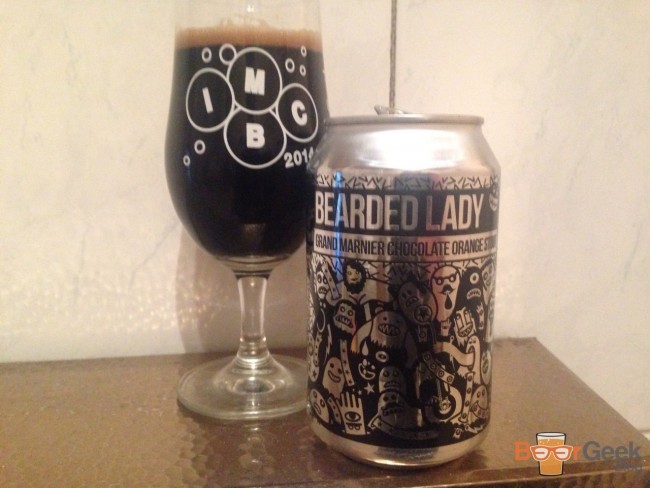 A pint of a traditional pale ale on cask might not be the most obvious choice for one of these lists. But beer is all about the context in which it’s drunk and I can’t think of one that’s meant more to me than this, ever. And it happened twice in the same month.

My Grandad died a few weeks ago. Not only was he my last remaining grandparent and somebody I was very close to but he was also probably partly responsible for this blog. Indirectly at least.

For my entire childhood, he was a landlord of a Timothy Taylor pub in Keighley, near Leeds. I have such fond memories of that pub from a very early age; dancing on the pool tables, ‘borrowing’ his keys for unlimited goes on the jukebox and fruit machines and of course, pulling pints behind the bar, usually Landlord.

On the day he died, I was due to visit Huddersfield, I thought about cancelling after I got the news but somehow going to Yorkshire seemed the right thing to do. When I walked into The Grove and saw Landlord on cask it felt like fate. I don’t drink pints very often these days but on that occasion, a pint of Landlord was the only option.

I’m not going to lie, more than a few tears were shed. It’s the first time I’ve ever cried over a pint but it felt good and tasted great. They know how to look after beer in The Grove, as they do most places in Yorkshire.

The Timothy Taylor/Landlord tribute continued on the day of the funeral.

To cheer myself up I booked a table at The White Swan at Fence, a pub/restaurant on the way home that was highly recommended by Jay Rayner.

When I arrived I found it was a Timothy Taylor pub, the only one in Lancashire in fact (although it is very close to the Yorkshire border).

Of course, there was only one drink I was going to order.

It was also very well kept and tasted great. It’s not big, it’s not fancy but it is a top quality, traditional UK cask pale.

But more importantly, a fitting tribute.