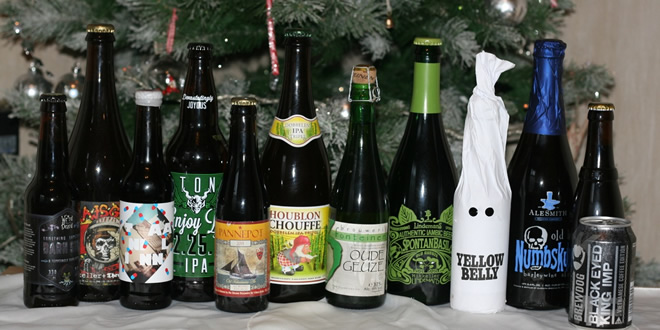 For my first Christmas as a beer blogger,q I wanted to showcase some of the special beers that I’d saved for the festive period.

After spending ages thinking about how to go about it, I realised that just like when I found out that ‘Golden Pints’ already exist, there’s also an established format in the beer blogging community.

‘Twelve Beers Of Christmas’ or rather #12BeersofXmas originates from the Beer O’Clock show. The idea is simply to choose 12 beers and share thoughts on them via blog, Instagram, Twitter etc..

More dedicated bloggers than I have been posting a full review each day. Unfortunately, I forgot to even post all of mine to Twitter & Instagram, let alone find time to write them up individually. They are all on Untappd though.

Instead, here is a five-day late round up of my 12 beers of Christmas.

First, a confession. The photo below is not Risgoop. I’m afraid I got a bit excited and forgot to photograph the bottle. Instead, I’ve used Majsgoop, another barley wine from the same series of collaborations between Mikkeller and Three Floyds.

The review is definitely about Risgoop though, ok? It’s one of only three of the twelve that I’ve had before.

Although officially classified as a barley wine, Risgoop is actually a rice wine.

The beer pours light and golden. Aromas are sweet, fruity and sugary. Actually more like an American double IPA than a barleywine.

Taste is also closer to a DIPA than a traditional barleywine, think orange, grapefruit, mango and pineapple. With a sweet malt background and then a slight bitterness at the end.

It’s insanely drinkable for 10.4%. Dangerous stuff in the wrong hands.

I had high expectations for this beer given it’s reputation and 100/100 Ratebeer score.

The dark brown, almost black liquid gives off a sweet, bready aroma with tons of dried fruit in there too.

Taste is hard to describe as there is so much going on; dried fruits again, caramel, nuts, coffee and much more. It sounds like there’s too much going on but that’s the beauty of the beer, it’s so well balanced the flavours just meld together.

It’s another beer that totally belies its ABV.

Day 3: Weird Beard – Something Something Darkside

I’m generally a fan of Weird Beard but have found inconsistencies with some of their beers.

Although it does tend to be lighter beers, I’ve had no such concerns with their stouts and a couple – Black Pearle and Double Pearle – are up there with my favourites.

‘Something Something Darkside’ is an imperial black IPA, it pours dark brown, almost black with a good creamy head. Aromas are sweet and fruity mixed with chocolatey maltiness.

The taste is similar and exactly how I like my black IPAs, with both of the two styles it’s supposed to fuse being equally obvious. The base of deep roasted malts is combined with a fruity, hoppy bitterness.

This was one of the beers I was most looking forward to trying.

I’m a huge Mikkeller fan and have enjoyed several of the ‘Spontan’ series before. I must admit I was skeptical about a beer brewed with basil.

I needn’t have worried though.

I was half expecting it to pour a vivid green but it’s a gorgeous sort of hazy golden orange colour. There are hints of basil in the aroma but it’s not as obvious as I assumed, there are floral notes too.

The taste is equally understated, the basil is definitely there, even more so as the drink warms, but it’s quite subtle and very well balanced. It combines with the other flavours wonderfully, it’s floral and slightly sour with some yeast funkiness.

The light carbonation and slightly dry finish make it a perfect aperitif, just as well as this was my pre-Christmas dinner drink.

This beer exists to be drunk fresh. When I’ve had it before, as well as BrewDog’s copycat Born To Die, I’ve always enjoyed them as quickly as possible.

But given the date on this particular bottle, I couldn’t resist saving it until the very end, Christmas Day.

Of course, even on the last day of its life, this IPA is probably fresher than most that we drink from bottles. It certainly tasted so anyway.

The golden beer has aromas of tropical fruits and pine. Taste is similar with grapefruit the most prominent flavour. But it’s really all about the delicate balance of sweet biscuity malt and hops.

For a 9% beer, it’s incredibly light and refreshing.

It’s hard not to have huge expectations when you drink what’s regarded by many as ‘the best beer in the world’.

It’s a genuinely lovely Belgian quad; rich and complex with a whole range of flavours from fig and raisin to brown sugar and molasses with some subtle spicing. It’s a classy drink and much more delicate than I expected.

I really enjoyed it, but it’s not my favourite quad and I can’t help thinking that its reputation precedes it. The beer is incredibly difficult to get hold of, partly because it’s brewed by monks, not for profit so they only brew as much as they need to sustain themselves. But also, because it’s supposed to only be available from the monastery in which it’s brewed. There’s a complicated procedure for ordering that seems to involve 100’s of phone calls ending in inevitable frustration.

From time to time they pop up on online websites – which is how I got my bottle- but they tend to be pretty pricey which also adds to the hype.

I just can’t get enough of To Øl at the moment. Even getting through 24 of their beers in as many days hadn’t dampened my appetite for them.

This imperial stout is brewed in collaboration with Põhjala from Estonia whom I enjoyed a few beers from at Indy Man this year.

I’ve never had a cognac barrel aged beer before. In fact, I’m not sure I’ve ever even had cognac before on its own. I know it works with Christmas pudding though so saved this beer for with our leftover pud.

Turns out it was a perfect match. The beer smells like Christmas, not in an obvious way, there’s no cinnamon, nutmeg or cloves. But rather, raisins, prunes and toffee with booze, probably cognac but smells like brandy or port to me.

Taste is similar but lightened by a touch of orange. It’s quite sweet, but that’s OK, it’s Christmas. It’s boozy but incredibly smooth for its very high ABV.

‘The Strongest Canned Beer In The World’ they claimed*. Which besides being an utterly pointless statement isn’t even true.

It’s no secret that I’m a BrewDog fan, but purely because most of their beers appeal to me. I have to ignore virtually all their marketing as it’s far more likely to put me off buying a beer.

I do particularly enjoy their bigger beers though and imperial stouts in particular, so this was a must. It didn’t let me down.

It pours like any good imperial stout should, thick and black. Aroma is mostly coffee with some chocolate and a hint of coffee.

The coffee taste is more subtle than I expected. Perhaps because there’s so much else going on. The beer has been aged in bourbon casks first and then on coffee beans and vanilla pods. It’s complex but wonderfully smooth.

I doubt it benefited from being in a can and I can’t help thinking it was a bit of a stunt. But personally, even though I’d never drink a beer like this straight from the can I am a fan of them in general since they’re so much lighter, chill faster and are easier to store/transport/get rid of.

A cross between an American double IPA and a Belgian Tripel.

Pours a golden colour, quite lively too. Aroma is lovely; fruity, floral citrus and a little spice.

It tastes very much as described, like a well-hopped tripel. The Belgian yeast character is most prominent at first but then it gives way and lets the hops take over, leaving a quite bitter finish, which I loved.

Buxton are my favourite brewery, I’ve had their collaboration with Swedish brewery Omnipollo a couple of times but I don’t think I appreciated just how good it is.

Yellow Belly is quite possibly the nicest beer I’ve ever had the pleasure of smelling. It’s a ‘peanut butter biscuit stout’ that contains no peanuts, butter or biscuits. Yet it smells like the most amazing, freshly baked peanut butter cookie. So clever.

I’d almost be happy to pay for this beer just to sniff it. Luckily I got to drink it too and it tastes just as good. It’s sweet but not overly so with big dark chocolate vibes followed by a touch of coffee and then a peanut butter like finish.

Oh, and in case you were wondering: neither Buxton nor Omnipollo support the KKK. This beer “is brewed to celebrate all things new, open minded and progressive” and the name ‘Yellow Belly’ refers to “a person who is without courage, fortitude, or nerve; a coward.”

Oude Geuze is a true geuze – a blend of one, two, and the year-old lambics which are then aged for at least another year after blending.

It smells a little funky and a bit acidic but not too much.

Taste is slightly sweet but mostly sour, citrus and lemon especially. It’s complex, as you’d expect but very well balanced too; fruity and a bit floral with a very dry finish. I could happily drink bottles of this on a regular basis.

I finished as I started, with a brilliant barley wine. This time, from San Diego-based AleSmith.

Closer to a traditional barley wine than the Mikkeller / Three Floyds one, but this is described as a ‘West Coast barleywine’ due to its liberal use of hops.

The aroma is that distinctive sweet caramelly smell but the hops again end up reminding you of a big American DIPA as you taste, not that that’s a bad thing.

It’s smooth and quite drinkable for its ABV, a very good barleywine but not quite up there with the best for me.

So there you have my twelve beers of Christmas. Although five days later than I wanted, at least it’s just before Christmas is officially over. 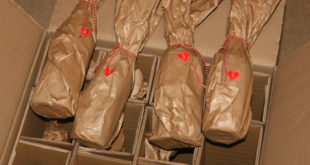