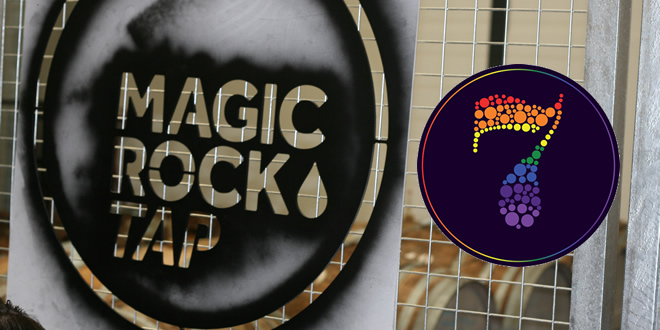 The Rainbow Project began in 2013 when seven of the UK’s best breweries each brewed a beer inspired by a colour of the rainbow.

In 2014 the UK breweries were paired with a European counterpart to create a collaboration rainbow beer, while this year saw them each paired with a top US brewery.

I missed it completely the first time around and only managed a couple of the beers from last year.

This time I wanted to try the lot so got myself a ticket to the Rainbow Project Northern launch at Magic Rock Tap in Huddersfield. Conveniently close on the train and one of my new favourite places to drink. 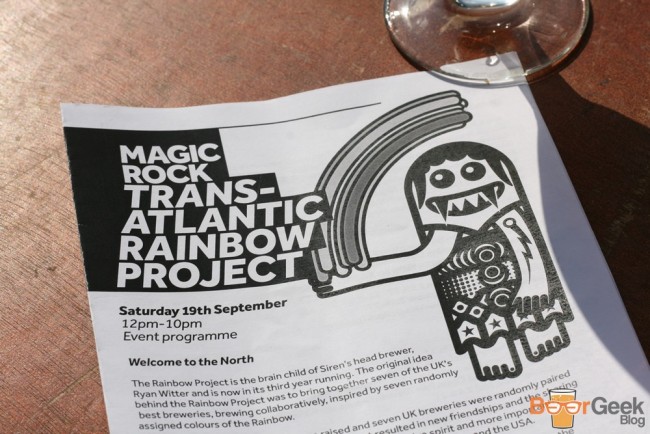 But this post isn’t actually about the rainbow beers because although they were all available on tap at the launch event I chose to buy a case to take home instead.

Partly so I could appreciate them properly later but mainly so I could spend the entire day drinking the phenomenal range of beers that the other breweries were providing.

The ticket only event was essentially a beer festival; tickets cost £10, which included: entrance, a glass and 7 tokens. Further tokens could be bought and used to purchase additional beers. 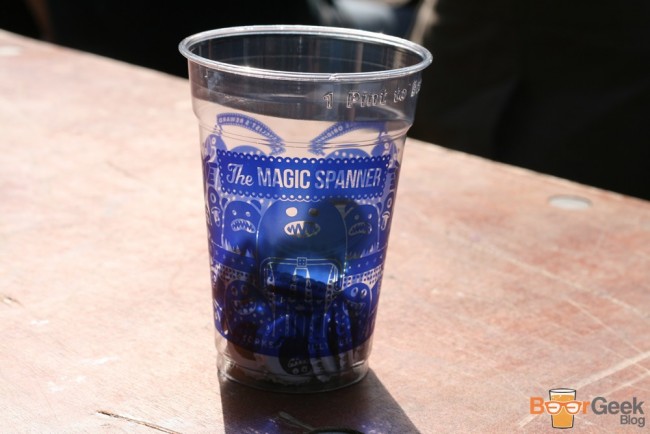 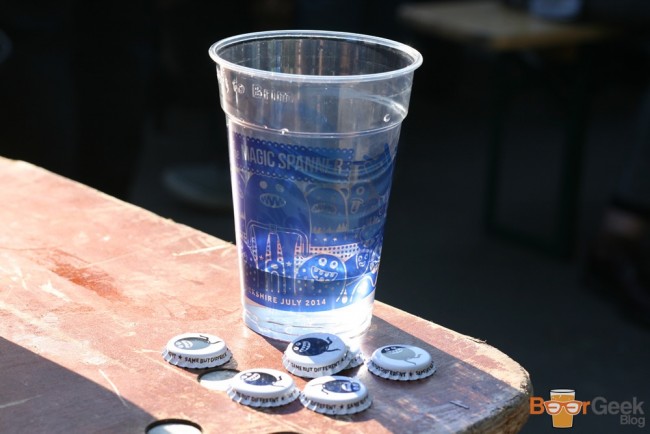 The event was a sell out with apparently more than 500 tickets sold. Thankfully the Huddersfield weather was glorious so we could make use of the ample outside space. 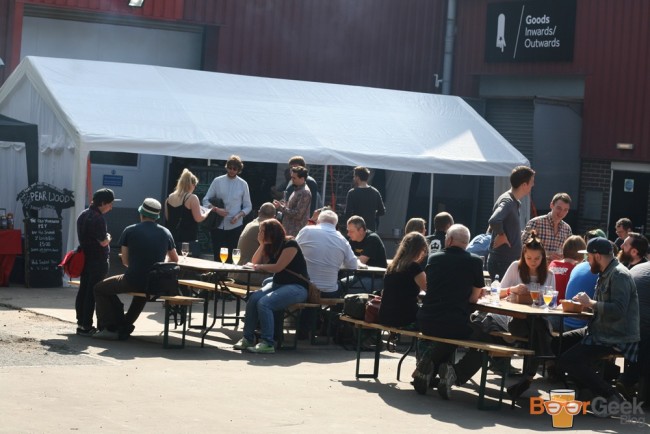 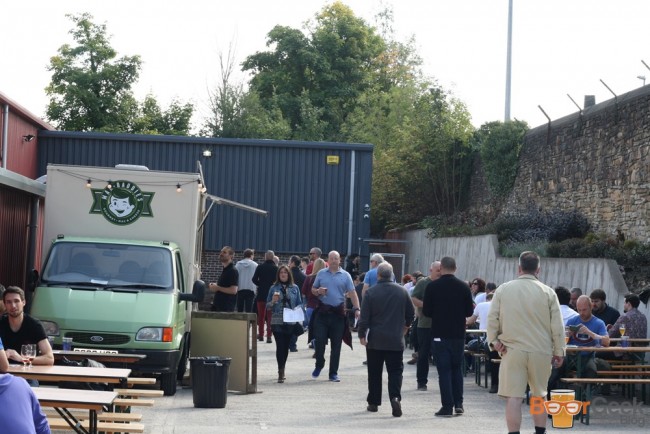 The regular bar inside was turned into the ‘Rainbow Bar’, featuring the 7 Rainbow Project beers (and a few Magic Rock classics). 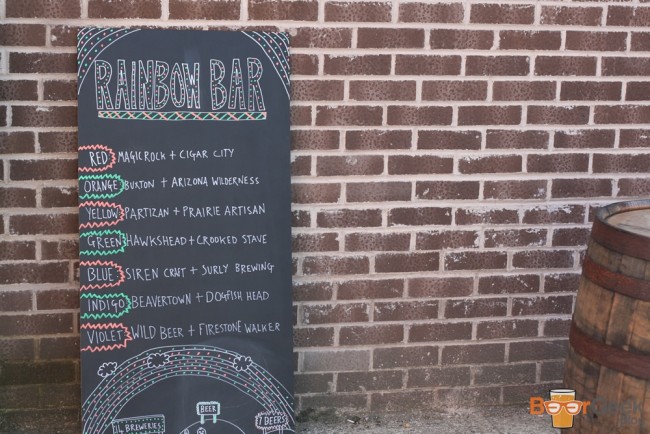 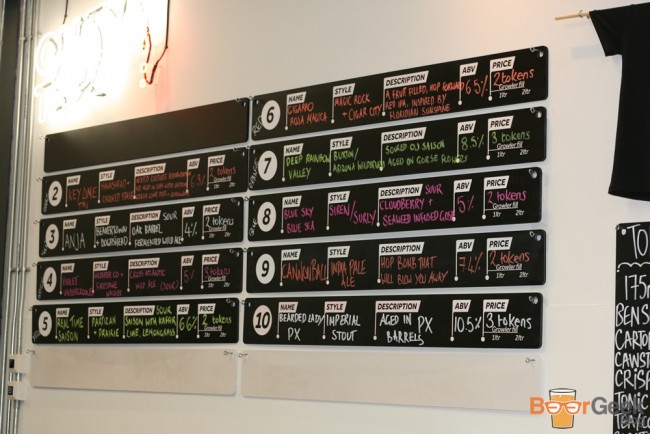 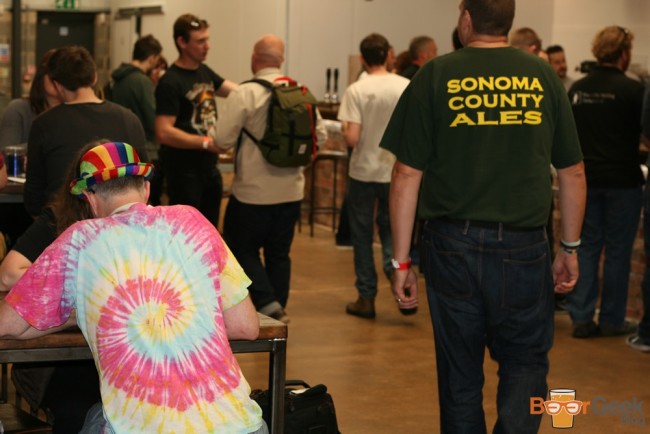 It was joined by three outdoor bars making a total of 32 taps.

The UK bar had extra beers from the seven U.K breweries involved while the Magic Rock bar had another six taps of their own beers. 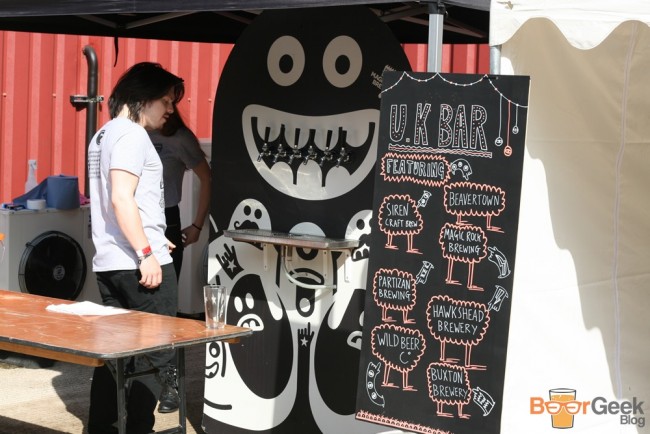 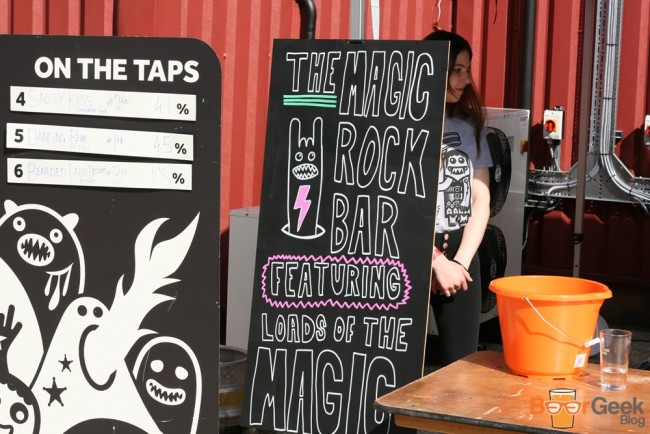 Initially I spent most of my time at the U.S bar where the seven fantastic transatlantic breweries taking part in the Rainbow Project brought over some simply stunning beers, most not usually available in this country. 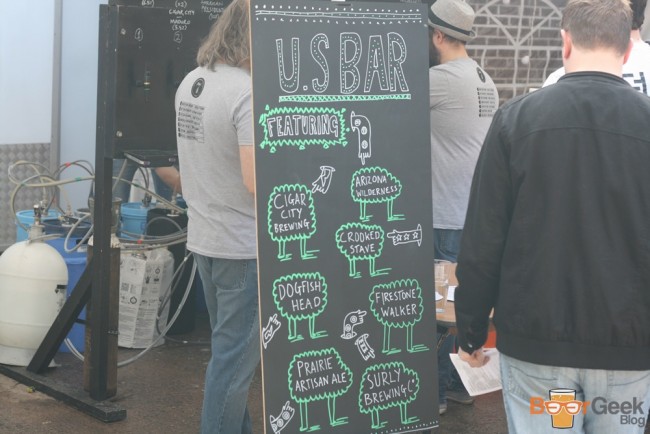 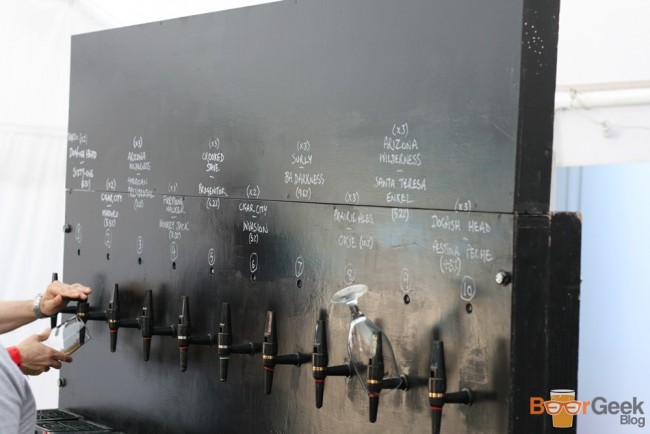 Starting sensibly with ‘Festina Peche‘ by Dogfish Head; a gentle 4.5% Berliner Weisse fermented with fresh peaches. The lovely sour was fruity and tart with tons of peach flavour; it was just perfect in the sunshine. 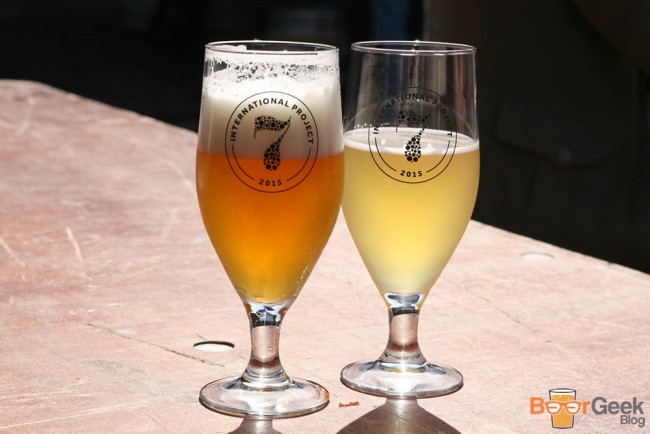 After a few more drinks it was time to start on the heavy hitters.

Including ‘Bearded Lady Barrel Aged Bourbon Dessert Edition‘, a gorgeous sweet version of one of my favourite imperial stouts. With a vanilla, chocolate and cinnamon vibe it was perhaps not the ideal day for it but I loved it all the same.

Though it may not have been the weather for them two more favourites were imperial stouts. Surly Brewing Company’s’ Darkness‘ and ‘American Presidential Stout‘ by Arizona Wilderness Brewing Co. 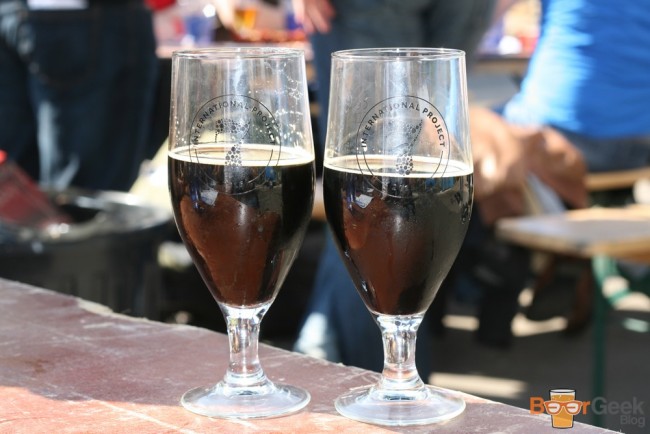 The range of beers available was outstanding.

From quality IPAs from the likes of Dogfish Head to stunning saisons and sours from Crooked Stave to the rich imperial stouts such as those mentioned above.

And that was just the U.S bar!

After finally exhausting their supply I moved on to the other bars and enjoyed Beavertown’s ‘Barrel Aged Moosefang‘ and a stunningly fresh ‘Wyoming Sheep Ranch‘ by one of my favourite UK breweries Buxton.

There was even time for a couple of old Magic Rock favourites, Cannonball IPA and High Wire Grapefruit.

Despite trying 25 beers on the day I only had one of the seven rainbow beers, Hawkshead & Crooked Stave’s ‘Key Lime Tau’, but I did buy a box and it manage to get it home safely.

A thick, rich and super smooth imperial stout. Full of roasted malt flavours, particularly coffee and a touch of spice.

So good it was one of only two beers I went back for more of.

With a big malt backbone and huge amount of hops. Apparently they use six different varieties in the brew and then dry hop with BrewDog’s favourite, Simcoe.

Another big imperial stout, this one has a well deserved score of 100 on RateBeer.

It’s very dark and quite heavy but with a touch of hops to lighten things up. Flavours are chocolate and coffee with cherries and raisins.

And another stunning U.S style IPA. This one’s maltier than the previous hop bomb but equally special.

I’d been after this one for a very long time so was glad it didn’t disappoint. In fact, it was so good I went back for more.

Buxton, just like Magic Rock can do no wrong in my eyes. Their beers easily stand up to the quality of these top American breweries.

I loved imperial IPA ‘Wyoming Sheep Ranch’ the first time I had it but this was something else. Ridiculously fresh and tasting exactly as I like my IPA’s; huge tropical fruit and pine upfront with a big but balanced bitterness.

I must give a special mention to Crooked Stave – Vieille Artisanal Saison and Magic Rock’s very own Cannonball and Bearded Lady which were all so close to making the list, it was an incredibly difficult decision to leave them out. 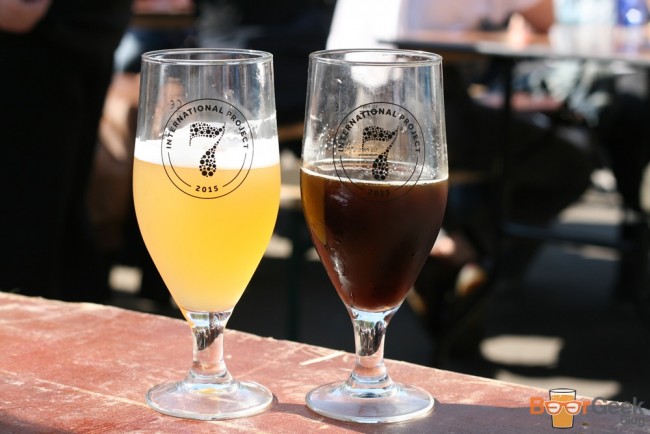 The food available looked decent too; it was nice to see a good range – provided by local street food traders – that didn’t include the usual burgers or hotdogs.

I sampled at least one dish from each of the vendors. Starting with an early pizza from ‘Yorkshire Pizza Kitchen’. 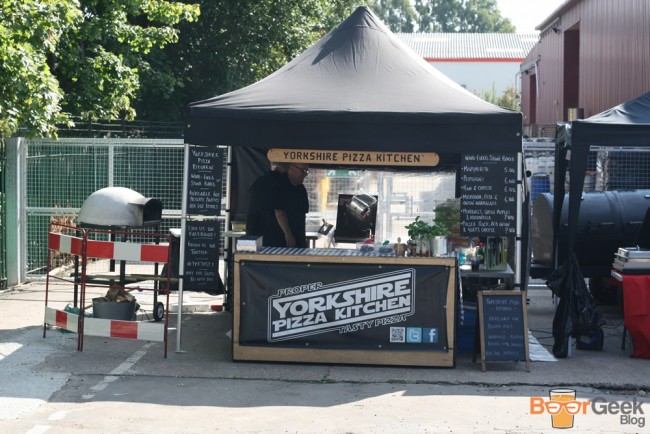 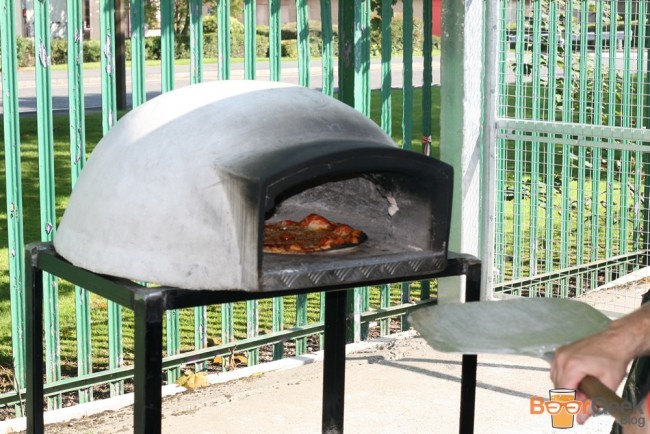 I’m a massive fan of wood fired pizzas and this was pretty decent, certainly far better than your average takeaway, but not even close to the sourdough bases from the likes of Pizza Pilgrim’s in London or Manchester’s Honest Crust and Rudy’s Pizza.

Followed by some ‘gourmet Mac & Cheese’ (not my words) from ‘MacDaddies. 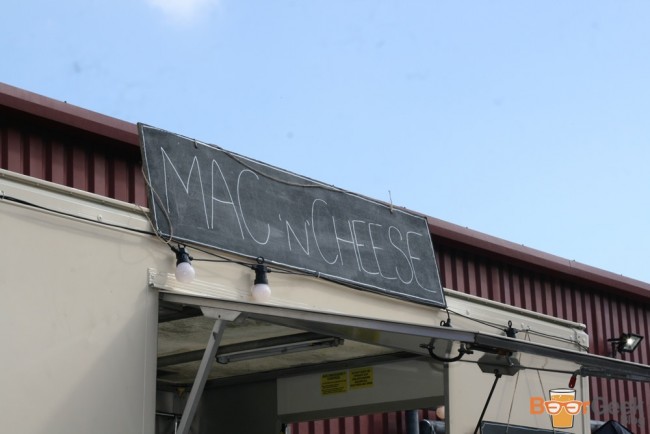 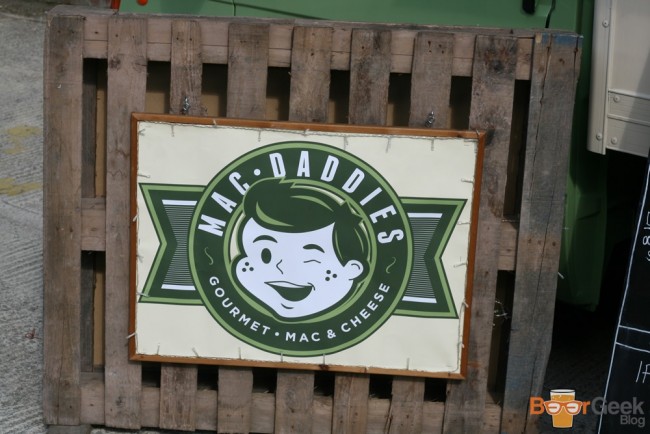 The ‘Mac & Cheese’ itself was pretty good, I definitely wouldn’t call it gourmet but it was perfectly enjoyable. Fairly tasty but not as rich and cheesy as I’d like.

But the ‘Mac ‘N’ Cheese Balls’ were excellent, perfectly round spheres of macaroni cheese are breadcrumbed and then deep fried. A great little beer snack.

‘The Old Yorkshire Pit’ were a bit of a disappointment though.

A friend went for some of their ‘St Louis Ribs’ fairly early on, apparently they’re hot smoked for six hours but at that stage they were really really tough, so I thought it best to give them a bit longer. 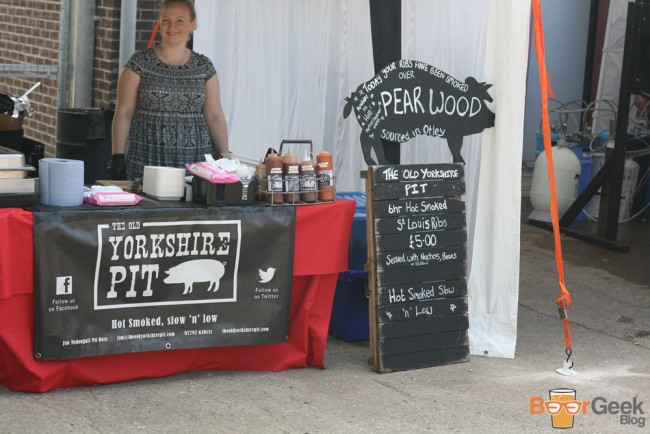 I got my own portion several hours later but sadly they weren’t much better.

I’d like to tell you about more of the food but I can’t as most of the vendors started running out by mid afternoon. Ridiculously everywhere had run out completely well before 8pm.

I’m lucky I’d managed to eat early but many people didn’t. It’s really not sensible to be serving so many big beers without having any food available. 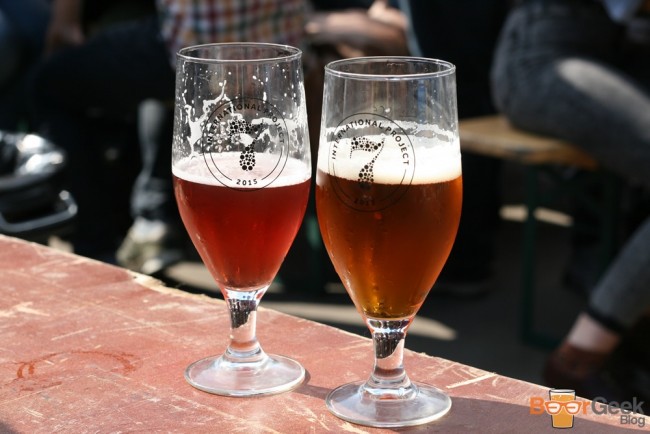 But besides the issues with the food it was otherwise a brilliant event.

We couldn’t have asked for better weather, it was expertly organised with hardly any queuing and most importantly the beers were unbelievable.

I can’t think of any other time I’ve had such a range of beers from American breweries of that quality available in one place at the same time, let alone at such reasonable prices.

I’m glad I made the decision to buy a box of the actual Rainbow Project beers though as it meant I could try so much more on the day but also I really appreciated the rainbow beers when I had them recently (review coming soon).

I hope the Rainbow Project returns for a fourth year in 2016 but the launch event will have to be quite something to top this.

I decided to take a short break from blogging last month so didn’t add to ...